Stand your ground, don’t fire unless fired upon, but if they mean to have a war, let it begin here.”  Captain John Parker, Lexington, 19 April 1775

After several weeks dominated by the Colorado shootings and the Islamic State-tied Islamist attack in San Bernardino, the likes of which will — thanks to the past four U.S. presidents — soon be at least a semi-regular occurrence in the United States, I wanted to briefly touch on three issues that seem to me to underscore the tyrannical-bent of the U.S. governing elite, and most especially the part of it that denominates itself the “Democratic Party”.

The Islamist attack in San Bernardino: The attack itself is merely another small skirmish — and another American defeat — in a war that an increasing part of Islamic world is waging on the United States. The Islamist are waging that war in large measure because of our national government’s relentless, tyranny-protecting interventionism in the Muslim world. As noted above, these attacks will become a fairly reliable feature of American life, and while that is certainly too bad, they will continue so long as the national government neither annihilates the enemy nor wises up, stops intervening, and leaves the Middle East to the catastrophic self-destruction it so richly merits.

But the more important point I want to make here is that because of the war-mongering, unnecessary interventionism, and open borders of the past four presidents, America’s internal security situation is out of control. The state and local police forces — courageous though they are — are insufficient to cope with the quickly broadening domestic Islamist threat these presidents knowingly cultivated, nurtured, and protected. The bottom line, of course, is that the citizenry must denounce and oppose anything that Obama and his sycophants — and their advocates like the half-wit, Obama-shill David Ignatius of theWashington Post and FOX’s no-wit, noise-machine Geraldo Rivera — say or do about what they deem the dire need for more unconstitutional gun control.

Today, Americans are confronting a domestic environment in which they will have to help local and state police forces to defend themselves, their families, and their country. No help can be expected from the national government as long as Obama is in office, or if another Clinton or Bush is elected president. Indeed, each of those people — and especially Obama — is nearly as great a threat to Americans and their nation’s survival as is the Islamist movement.

Perhaps the best citizens can do is to consult U.S. history. The Founders surely left us the 2nd Amendment so individual Americans could defend themselves and hunt, but the overriding reason they wrote and adopted the amendment was to make sure American citizens had arms sufficient to the task of destroying any U.S. national government that sought to become a tyranny. A government that might, for example, start unconstitutional wars, usurp legislative branch prerogatives, neglect national defense, constrict liberties protected by the Bill of Rights, install one-man rule, alter the Constitution without formal amendment, and use governmental agencies to persecute political opponents.

As Americans with commonsense know, the foregoing tyrannical activities have become increasingly common over the past four presidential terms. For that reason, it is also worth recalling that the U.S. Navy’s Admiral Halsey famously and correctly told the forces under his command that the way to win the Pacific War was to “kill Japs, kill Japs, and kill more Japs.” Because of the national government’s consistent and long-since-proven disinterest in defending the republic, its borders, or its citizens, Americans today would be best advised to immediately “buy guns, buy guns, and buy more guns” — and especially automatic weapons.

The post-Colorado abortion debate:  Since the Colorado shooting, many journalists — that is, Democratic mouthpieces — have spent much of their time anguishing about the harsh language used by other commentators to describe abortion, abortionists, dismembering still-living infants, Planned Parenthood, and other aspects of the abortion issue. I concur with these dear, sensitive, suffering souls and so want to suggest a short list of vivid and realistic definitions for some of the words and phrases that are common to the abortion debate, ones that I think precisely capture the essence of the players in the abortion process.

–Abortion doctors and nurses = Mengele-like executioners;  a regiment of the SS-Totenkopfverbände (AKA: Death’s Heads’ Units or SS-TV)*; and, by their actions, dedicated believers in the concept of untermenschen.**

–Women who champion and/or have abortions = Constitutionally privileged murderers

I also took time to draft a couple of up-beat slogans for Planned Parenthood, and scouted around for new logos for the organization. I thought both might help refurbish its — if viewed through Mrs. Clinton’s eyes —  saintly reputation after the broadcast of videotapes showing its employees merrily prolonging the torturous murder of human beings to harvest their organs and sell them. The following seem to fit the bill perfectly 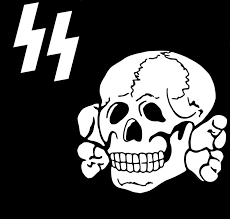 –Tyranny: Only a government intending to wrest sovereignty from its citizens and enslave them will seek to force the citizenry’s unconstitutional disarmament and systematically negate the 1st, 2nd, and 4th amendments. Only a government intending to govern by unilateral diktat will identify a part of the population as “non-humans” and then help to pay and protect the murderers of those so-called non-humans. Only a tyrannical government, unafraid of citizen resistance, will, for decades, refuse to kill its overseas enemies in numbers sufficient to prevail, and thereby allow its citizens to be killed at home because of its refusal to wage war mercilessly, enforce border-control/immigration laws, and obey the Constitution. Only a tyrannical government will use the occasion of lethal foreign or domestic military attacks on its citizens as the occasion to launch new attacks on the liberties of the same citizens.

As enough is coming very close to being enough, it is worth recalling that Captain John Parker’s words, noted above, were spoken at Lexington as his militia unit prepared to meet the forces of America’s national government of the day. Those forces had been sent to capture leading American dissidents and to seize the arms, ammunition, and other ordnance stocks of colonial Americans.

*The SS-Totenkopfverbände (SS-TV) — the Death’s Head Formations — were made up of Nazi Germany’s concentration camp guards. During World War II the SS-TV also provided troops for the first combat unit of the Waffen-SS, the Totenkopf Division, which eventually evolved into one of Nazi Germany’s most formidable combat formations. (See, https://www.jewishvirtuallibrary.org/jsource/Holocaust/deathhead.html )

**A German word meaning, literally, “sub-human”. The Nazis used the term to degrade the humanity of those fully human beings — Jews, Gypsies, Catholics, etc. — they intended to murder. (See, https://www.jewishvirtuallibrary.org/jsource/glossU.html)

***Originally designed by the National Socialist Party, A. Hitler, Chancellor